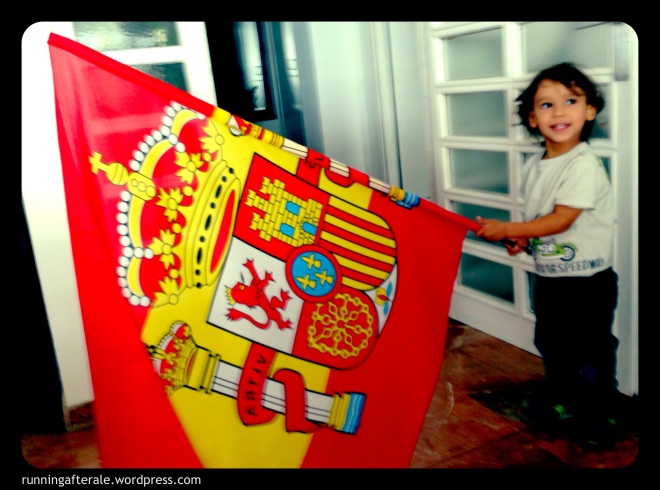 A few days ago we arrived in Madrid, Spain. We are here visiting my husband’s family. This has become a yearly pilgrimage now that Ale has come into our lives. I want him to know his family better beyond faces that appear on the computer screen via Skype. I am also hoping that he will pick up a few more words in Spanish.

International travel with a toddler is cruel and unusual punishment. Ale is a fantastic little traveler but the first days were very hard. The jet lag made him very sleepy and super confused He would wake up and not know where he was and would ask for Grandma- my mother- and his friends from daycare. Then he would walk around the apartment looking a bit lost. Last night he took his backpack and said he was going home.

My fear of Ale getting sick almost became a reality. Our first day here poor Al ate half a shrimp and came down with a low grade fever and hives covered his body. The solution was ibuprofen and Benadryl. My husband and sister in law had to go out at 11pm to the 24hr pharmacy to get these meds. Since then he has been ok but I’m still nervous!

Yesterday, Ale had the best time of his life. We went with his Aunt to the Museo del Ferrrocarril (train museum). Ale was in heaven running, jumping and dancing for joy! So many trains!! We even had a snack of potato chips and pineapple juice in an antique dining car. The best snack ever!

Today we are on the train going to Sevilla to see la Abuela- my husband’s mother. More adventures await! 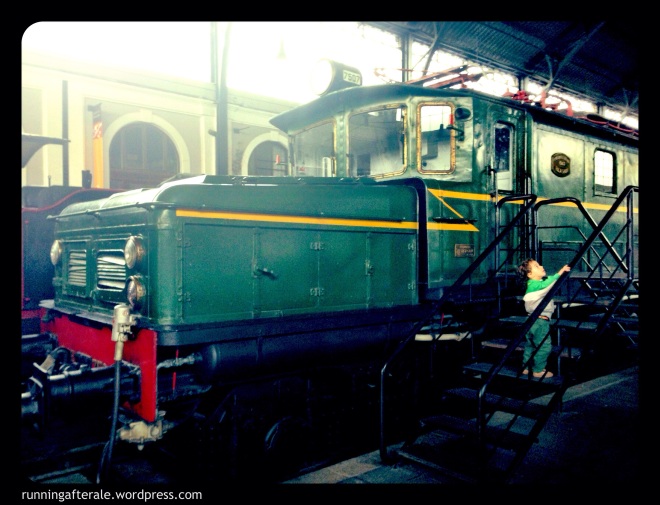 Error: Twitter did not respond. Please wait a few minutes and refresh this page.

There was an error retrieving images from Instagram. An attempt will be remade in a few minutes.

When Ale is napping you can find me on Tumbler

© Running After Ale, 2013-2014. Unauthorized use and/or duplication of this material without express and written permission from this blog’s author and/or owner is strictly prohibited. Excerpts and links may be used, provided that full and clear credit is given to Running After Ale with appropriate and specific direction to the original content.
When the Kids Go to Bed

we find laughter in the chaos

The juggle of raising 4 boys and losing the baby weight

Blind Mom in the Burbs

The trials, triumphs, tears, and travels of a stay at home mom in the suburbs of Sin City

a journey into the chaotic world of mommyhood

New father. Two kids. Telling it how it feels. And it's not all rosy! Follow on Twitter: @Secret_Father

I'm constantly running after my toddler Ale (Á-le). I'm out of breath and having the best time!

...the one thing more dangerous than a fool.

Exciting times in the kitchen with a toddler attached to my leg, hip or back...

And Three To Go

The Trials and Triumphs of Travel With a Toddler

Mommy A to Z

Journey To the Finish Line

PR's, 4 children, hopes and dreams; I'm always running after something

This WordPress.com site is the cat’s pajamas