Yesterday, I ran into the husband of a friend of mine. The friend that I gave my breast pump to close to a year ago. He told me that we have to get together to catch up and let our kids play together. At the end of the conversation he said that he wants to return some the things that I gave his wife when she had the baby including the breast pump. She no longer needs it.

Wow! That brought back many memories and emotions. The lending of the breast pump to his wife sparked me to write the blog post Farewell My Breast Pump! Farewell!. I was also struck by the passing of time. Ale is a full fledged toddler and I have no desire to breastfeed him any longer. That’s for babies. We have new bridges to cross together. So I’ll take back the pump, but what will I do with it? Right now it will serve as a relic of the past. 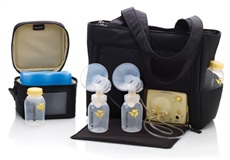 Yesterday, I lent my Medela Pump in Style to a friend of mine with a 3 month old baby girl who is returning to work. I lent it with great misgivings. I almost did not give it to her. My husband had to take it down from the cabinet and pack it for me. He reminded me that I was the one who offered it to her. “Yes, Linda you can borrow it! No problem! ” and that I had not breastfeed Ale in the last FIVE months.

So why the misgivings? Watching that pump being wrapped up was like watching my first year with Ale flash in front of me. I swear I felt a letdown of milk! That pump- like it or not- was my symbol that I was a super breastfeeding mama who survived it all to give milk to my bebe for his first year of life.

I pumped to build my supply. Then I was pumping to start a freezer stash. Then I pumped at work in any clean spot I could find. I doubled pumped, I single pumped, I fed Ale and then pumped. I PUMPED!! Coming home from work I proudly placed my 10-15oz of milk in the fridge and I indeed cried when the milk was spilt. Oh, I can hear the pump, pumping away now saying “Make milk, make milk, make milk”!

Giving the pump to my friend, who promised to return it, also symbolizes the fact that Ale is growing so fast. When I stopped breastfeeding and transitioned to cows milk he would still come to the breast for comfort and get the few ounces that I was still making. Now he is coming less and less. He sees that mama no longer has milk then reaches out for his bottle. Its hard. I cried and cried the first night I made the decision to stop due to work restraints. Now I’m mourning the true end of breastfeeding.

So now I’m passing my pump to my friend who no doubt will start to feel attached to the pump and in a years time will begrudgingly give it back to me. She will then sit down and blog about the end of breastfeeding and marvel at how much her baby has grown.

13 thoughts on “Relic Of The Past”

Error: Twitter did not respond. Please wait a few minutes and refresh this page.

When Ale is napping you can find me on Tumbler

© Running After Ale, 2013-2014. Unauthorized use and/or duplication of this material without express and written permission from this blog’s author and/or owner is strictly prohibited. Excerpts and links may be used, provided that full and clear credit is given to Running After Ale with appropriate and specific direction to the original content.
When the Kids Go to Bed

we find laughter in the chaos

The juggle of raising 4 boys and losing the baby weight

Blind Mom in the Burbs

The trials, triumphs, tears, and travels of a stay at home mom in the suburbs of Sin City

a journey into the chaotic world of mommyhood

New father. Two kids. Telling it how it feels. And it's not all rosy! Follow on Twitter: @Secret_Father

I'm constantly running after my toddler Ale (Á-le). I'm out of breath and having the best time!

...the one thing more dangerous than a fool.

Exciting times in the kitchen with a toddler attached to my leg, hip or back...

And Three To Go

The Trials and Triumphs of Travel With a Toddler

Mommy A to Z

Journey To the Finish Line

PR's, 4 children, hopes and dreams; I'm always running after something

This WordPress.com site is the cat’s pajamas